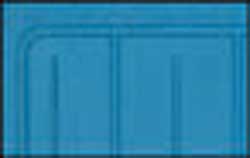 OER¬Æ quality reproduction of the original style front and rear full length floor mats designed for use on 1961-1964 Chevrolet Impala and Full Size coupe, sedan and convertible models. These high quality rubber floor mats are an exact reproduction of the original mats, featuring the Chevrolet Bow Tie logo on both the front and rear mats. Manufactured in quality, high grade rubber in the correct OE color for authenticity. Each mat is injection molded and die-cut featuring the Chevrolet Bow Tie logo which is separately molded into the mat for an authentic appearance and originality. Note: Will also fit 1965-up models with slight modifications. Some trimming may be required to clear the seat belt area.

Note: Some trimming may be required to clear the seat belt area. Will also fit 1965-1972 models with slight modifications.