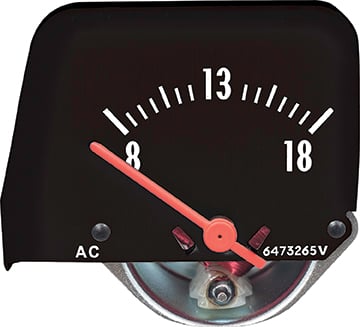 Reproduction of the original-style voltmeter designed for use on 1968-74 Nova models with console gauges and other variuous GM models as listed. The original console gauge package included an ampmeter, not a voltmeter. This volt meter is designed to install in place of the original ammeter gauge. Each gauge features a brushed aluminum face and original style markings to match the surrounding guages. Note: This volt meter gauge is designed for Nova models which featured a black face console gauge set. The gauge can be used for all models listed. 1968-69 Camaro included a silver face gauge.

Note: A mounting hole must be drilled for this Volt meter gauge to operate properly. A layout template is included for proper mounting of the voltmeter into the mounting plate.

Important: Will not work with original ammeter wiring.